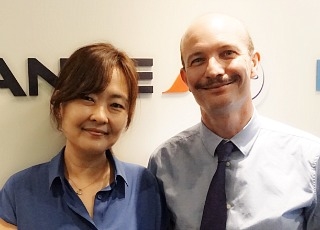 Mr. Stéfan VANOVERMEIR  had already a work experience in Air France Korea from 2005 to 2007 as a Commercial Director. Since that time, he had various positions : Project Distribution Manager,  Pricing Director Intercontinental of AIR FRANCE – KLM, and  VP Intercontinental Revenue Management in 2013.

Since September 2015,  he is a General Manager for Japan AIR FRANCE – KLM and from June 2016,  his perimeter was extended to New Caledonia.

Mrs. Lee has been a representative of the company for 8 years, in Air Asia X and Las Vegas Convention and Visitors authority.

She graduated from Yonsei University with a degree in English Language and Literature and has a Master and Ph. D in Tourism Management from Kyonggi University.